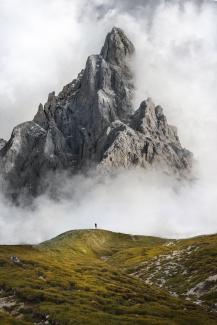 Pivoting away from a pivot

In July and into August, investors were warming to the possibility of a dovish reversal in Fed rate hikes early next year—a pivot, according to a closely watched gauge that measures rate expectations from the CME Group.

Remarks from Fed Chief Jerome Powell’s press conference in late July fueled such hopes, though he was careful to dismiss any chatter about next year.

“You’ve got to take any estimates of what rates will be next year with a grain of salt, because there’s so much uncertainty,” he said.  [https://www.federalreserve.gov/mediacenter/files/FOMCpresconf20220727.pdf]

Fair enough, but that didn’t prevent a surge in optimism that a peak in the rate of inflation might soon be followed by a peak in hawkish Fed sentiment.

The growing belief that the rate of inflation has peaked, coupled with talk that interest rates might head lower next year, sparked a rally that carried over into August.

Yet, several Fed officials and Powell himself doused hopes that the Fed might be set to reverse course next year, reigniting market volatility.

In a short August 26 speech that lasted about nine minutes, Powell was direct, calling the Fed’s goal of price stability its “overarching focus right now.”  [https://www.federalreserve.gov/newsevents/speech/powell20220826a.htm]

“Restoring price stability will take some time and requires using our tools forcefully [our emphasis] to bring demand and supply into better balance,” he said.

“While higher interest rates, slower [economic] growth and softer labor market conditions will bring down inflation, they will also bring some pain [our emphasis] to households and businesses.  These are the unfortunate costs of reducing inflation.  But a failure to restore price stability would mean far greater pain.”

That was Powell pivoting away and distancing the Fed from investor talk of a pivot.

Use of the word ‘pain’

It’s unusual for a Fed chief to use the word ‘pain.’ Still, it was carefully selected in a prepared speech.  It wasn’t an off-the-cuff remark.  In recent years, rate hikes were communicated in gentle terms.

But it’s a different economic environment today.  And the Fed seems intent on squashing the very inflation it helped create.  Yet, it would be unfair to blame high inflation completely on the Fed.  Trillions of dollars in fiscal stimulus, pandemic lockdowns, and supply chain woes have also contributed to price pressures.  But the Fed is being tasked with cleaning up the mess.

You see, the Fed wants to avoid the mistakes of the 1970s, when monetary policy was inconsistent, and inflation became embedded in the fabric of our economy.  In its view, it’s better to take a tough stance now rather than be forced into even harsher measures down the road.

While there was no mention of a recession in Powell’s speech, past talk of a soft or softish economic landing was noticeably absent.  A soft landing is jargon for a slowdown in economic growth that preempts a rise in inflation (or slows the rate of inflation) without a recession.  We saw this take place in a series of rate hikes in 1983-84 and 1994.  In both cases, economic growth moderated, rate hikes ceased, and stocks posted strong returns in 1985 and 1995.

Today, the Fed is preparing the public for a bumpier ride, and stocks reacted accordingly by month’s end.  It is operating in an environment where a peak in inflation isn’t enough to change course.  Today, the Fed has repeatedly said it wants “compelling evidence that inflation is moving down, consistent with inflation returning to 2%.”

A simple slowdown in inflation would be an easier objective.  But central bankers seem intent on getting inflation back to 2%.  Moreover, they also want to recover lost credibility after botching last year’s forecast that the surge in inflation was simply transitory.

Two percent is an obtainable goal, but it’s a steeper hurdle that will require more of the harsh medicine that has become a big part of the Fed’s anti-inflation playbook.  The Fed also runs the risk it could spark undue hardship in financial markets, as products created when rates were lower collide with today’s higher-rate environment.

A little bit of luck from the supply chain and a continued moderation in oil prices would also help.

How might an investor react amid today’s uncertainty?  Look past the headlines.  Stocks respond to short-term headlines, but you should stay focused on your long-term goals.

We caution against timing markets.  In order to be a successful market timer, you must consistently pick the top and the bottom through various cycles.  We have yet to find anyone that has mastered such a feat.

Maintain your diversified portfolio that is based on your risk tolerance.  What level of short-term loss is acceptable as you invest toward your long-term financial goals?  Are you finding that the recent market decline is forcing you to rethink your tolerance for risk?  If so, let’s talk.

Finally, a holistic financial plan keeps you focused on your long-term goals and helps remove the emotional component that encourages too much risk when stocks are surging and discourages one from panic-selling when markets decline.

Your financial plan isn’t set in stone.  Any number of circumstances and changes in your personal situation may require a mid-course correction.  But a disciplined approach has proven to be the most effective path to reaching one’s goals.

I trust you’ve found this review to be educational and insightful.  If you have any questions or would like to discuss any matters, please feel free to give me or any of my team members a call.