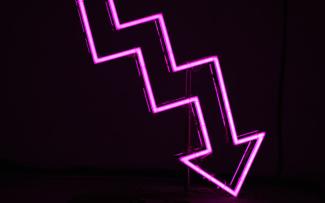 There are plenty of reasons why inflation is at a 40-year high: easy money and low interest rates, rising wages, supply chain disruptions, and fiscal stimulus that has fueled demand for consumer goods.  And all of this is happening at a time when food and energy costs are rising.  Last year, the Fed insisted the jump in inflation would be temporary--“transitory” was its word of choice.  But inflation proved to be more troublesome than they xpected, transitory was retired, and the Fed quickly pivoted.

Gone are pledges to keep the fed funds rate at near zero through at least 2023.  Instead, Fed Chief Powell seems determined to bring inflation back under control, and that means the Fed is contemplating a series of rate hikes in 2022.  His more aggressive approach created volatility in January, as investors attempted to price in several rate hikes this year.

Let’s look at recent history and briefly dive into the numbers so we may paint a picture.  During the 2004 to 2006 rate-hike cycle, then-Fed Chairman Alan Greenspan said rate increases were likely to be “measured,” as he embarked on a series of quarter-point rate hikes.  His goal: reassure investors and avoid rocking financial markets.  Fed Chief Janet Yellen and later Powell also soothed anxieties by signaling rate hikes would be “gradual” when rates slowly began to increase in late 2015.  “Gradual” wasn’t as opaque as “measured,” but the goal was the same: reassure investors.

At Powell’s late-January news conference, he wasn’t making any promises on how quickly rates might rise.  He wouldn’t rule out a rate hike at every meeting, beginning in March (there are eight scheduled meetings each year, including January). He didn’t dismiss the possibility of a 50bp increase.  And, there was no mention of 'gradual' or 'measured.'

The last time the Fed was truly aggressive was back in 1994, when the Fed implemented several 50bp increases and one 75bp hike.  Rates doubled from 3% to 6% in one year.  During each of those tightening cycles, including 1994, inflation was under control.  The Fed acted pre-emptively.  Today, it is reacting to high inflation.

We are not saying we’re going to see a repeat of 1994.  One key measure from the CME Group suggests five 25bp rate hikes this year. But it’s simply a projection.  And projections can change based on how the economy progresses.  Powell warned that inflation could remain stubbornly high this year.  Or, it’s possible supply chains will settle down and lessen the need for a strong central bank response. (Federal Reserve, St. Louis Federal Reserve)

The Fed’s challenge: engineer a soft economic landing, which brings down inflation without throwing the economy into a recession.  Barring a significant health crisis or a major geopolitical event, the Fed’s new posture will probably be the focus this year.

I trust you’ve found this review to be educational and helpful. If you have any questions or would like to discuss any matters, please feel free to give me or any of my team members a call.