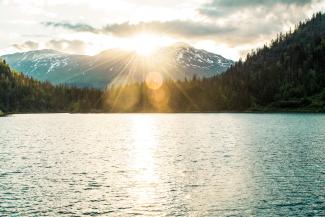 Storm clouds in September give way to a sunnier October

For reasons that are not fully understood, September has historically been the worst month for stocks, according to the average S&P 500 return for each month (St. Louis Federal Reserve dating back to 1970).

During September, the Dow shed 8.8% and the S&P 500 Index gave up nearly 10% (MarketWatch).  Historically, stocks turnaround in October, and the remainder of the year is favorable for investors.  So far, markets have not deviated from the pattern.

What led to the rebound in October, a rebound that fueled the best monthly rise in the Dow since 1976, according to Barron’s?  Bear market rallies are not uncommon.  Following the steep decline in September, it’s not unusual for overly negative sentiment and oversold conditions to lead to a bounce, as we saw in June and into August.  The mirror image would be a pullback in a bull market, when excessive speculation and bullish sentiment can lead to a short-term downdraft.

But October’s strong rally was not simply technical in nature.  As we saw when second quarter earnings were reported, profits for most S&P 500 firms are coming in ahead of low expectations, according to Refinitiv.  In other words, we didn’t see the earnings apocalypse that some had feared.  But there were some high-profile exceptions.  The uncertain global economy and the strong dollar (overseas sales must be translated back into a stronger dollar, which reduces earnings) made a mess of several tech bellwethers.

Reports from Amazon (AMZN), Microsoft (MSFT), Alphabet (Google, GOOG), and Meta Platforms (Facebook, META), are a ‘boots on the ground’ review of what’s happening in some sectors of the global economy.  Profit misses and/or a disappointing outlook hit shares hard.

Finally, a Wall Street Journal story late last month all but guaranteed a jumbo-sized rate hike during November, but there was also talk that some Fed officials are growing increasingly leery over the current steep path of rate increases.  They don’t expect near-term rate cuts. Instead, some Fed officials may argue that the Fed should slow the pace and possibly stop hiking rates early next year, as they assess the impact of recent policy actions.

Unlike Fed pushback from pivot talk during the summer, Fed officials haven’t lined up to disavow the story.

More likely, the Fed maintains its tough anti-inflation rhetoric but hints at a more flexible position amid rising economic uncertainty.  The Conference Board’s Leading Index, the housing market, and the inverted yield on the 10-year/3-month T-bill (the 3-month rate is higher than the 10-year yield) suggest a recession is unavoidable, probably next year.

Yet, in September, Fed Chief Powell was decidedly hawkish.  In just six short weeks, we could hear a different tone—still resolute on inflation, but with more wiggle room to react to changing economic conditions.  Investors are anticipating some shift going forward, and it contributed to last month’s rally.  But any adjustment in policy could quickly fall by the wayside with another disappointing inflation number.

The general economic fundamentals have yet to noticeably shift.  Just as low rates, low inflation, and record corporate profits helped drive equities higher during the 2010s, today’s high inflation and high-rate environment has led to a bear market.  But investors attempt to sniff out new trends.  It would be highly unusual for investors to wait for the all-clear sign before piling into stocks.

Table 2: Declines in the S&P 500 Index since the end of WWII

Source: Guggenheim 5/16/2022 The S&P 500 Index is an unmanaged index of 500 larger companies which cannot be invested into directly. Past performance is no guarantee of future results.