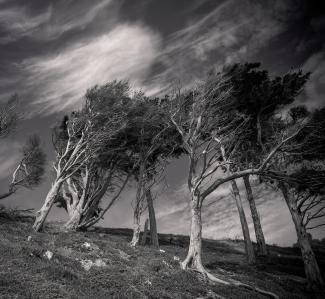 For reasons that are not fully understood, September has historically been the worst month for stocks, according to the average S&P 500 return for each month (St. Louis Federal Reserve dating back to 1970).  As illustrated in Table 1, this past September was indeed a weak month.  It was also the worst month of 2022 for the S&P 500 (MarketWatch, monthly return data).

What worked against stocks last month?

Headwinds that have battered markets this year remain in place.  For starters, rate hikes. The Federal Reserve hiked the fed fund rate another 75 basis points (1 bp = 0.01%) to 3.00% - 3.25% last month, maintained its aggressive stance, and suggested in its economic projections that we might see another 125 bp by year-end.

Why is the Federal Reserve raising interest rates at a pace not seen since the second half of 1980? (Rate data from the St. Louis Federal Reserve) Inflation remains stubbornly high.  Ultimately, price stability is the foundation of a strong economy and long-lasting economic expansion.  But the Fed’s rate-hike hammer hasn’t landed without pain.

While the Federal Reserve is not publicly forecasting a recession, its latest set of projections released last month show it believes its inflation-fighting campaign will boost the unemployment rate next year.  Investors are also growing concerned the economy could sink into a recession next year, which would depress earnings.

In addition, the sharp increase in interest rates has led to a much stronger dollar since parking cash safely in the U.S. offers a higher return to foreign investors.  A strong dollar reduces the price of imported goods and the cost of an overseas vacation, but the rapid increase in the greenback against foreign currencies is raising fears the Fed could unintentionally “break” something in the financial markets, either at home or abroad.

It happened during the early 1980s, when sharp rate hikes put a heavy strain on Latin America, and again in 1994, when rate hikes exacerbated problems in Mexico, leading to a bailout.  It also led to bankruptcy in Orange County, California.

We’re not forecasting an imminent financial crisis, and any unexpected shift by the Federal Reserve could alleviate financial market pressures.  That said, we recognize that the Fed’s steely resolve to bring down inflation has created pain in financial markets.

Taking a longer-term view, we want to emphasize that bear markets eventually come to an end, and bottoms typically occur when negative sentiment is high.  According to Charles Schwab [https://www.schwab.com/learn/story/market-volatility ], the average bull market since the late 1960s ran for about six years, delivering an average cumulative return of over 200% for the S&P 500 Index.

The average bear market lasted roughly 15 months, with an average cumulative loss of 38.4%.  The longest bear market lasted just over two and a half years.  It was followed by a nearly five-year bull run. The shortest occurred in 2020 and lasted only 33 days.

We won’t venture to guess how October might end, and we would counsel against making portfolio adjustments based on a one-month time horizon.

October has a spooky reputation—1929, 1987, 2008. Since the 1970s, it has been a volatile month (Advisor note: standard deviation of monthly returns of 6.3% is the highest monthly reading) but historically has been a strong month, according to S&P 500 data (St. Louis Federal Reserve).