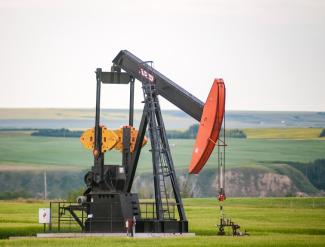 John McCain said, “Whoever controls oil controls much more than oil.” Barack Obama observed, “Our enemies are fully aware that they can use oil as a weapon against America. And if we don't take this threat as seriously as the bombs they build or the guns they buy, we will be fighting the War on Terror with one hand tied behind our back.”

The decade of the 1970s was characterized by rising oil consumption in America while domestic production declined, leading to increased dependence on foreign producers. In October 1973 an oil crisis ensued when members of the Organization of the Petroleum Exporting Countries (OPEC) led by Saudi Arabia initiated an oil embargo aimed at nations that supported Israel during the Yom Kippur War, America included.

An aide to President Richard Nixon declared the action “an energy Pearl Harbor” as panicked motorists waited in long gas lines, fist fights broke out at the pumps, supplies were limited, and prices rose, aggravating inflation. Nixon’s successor, President Gerald Ford, declared, “We must proceed with our own energy development. Exploitation of domestic petroleum and natural gas potentialities, along with nuclear, solar, geothermal, and non-fossil fuels is vital. We will never again permit any foreign nation to have Uncle Sam over a barrel of oil.”

Here we are, decades later, relearning lessons of history midst an inflationary surge replete with soaring energy prices. We can blame Putin, supply chain bottlenecks, big corporations, etc., but the root cause of inflation is the interplay between supply, demand, and the money supply. Milton Friedman (1912-2006) was a lauded American economist, winner of the 1976 Nobel Prize in Economic Sciences. Friedman famously declared, “Inflation is always and everywhere a monetary phenomenon, in the sense that it is and can be produced only by a more rapid increase in the quantity of money than in output.”

In response to the Covid-19 induced shutdowns, the Federal Reserve Bank vastly expanded the money supply while holding interest rates near zero, and as Covid relief funds flowed to consumers and various entities. In May, 2020, CNBC reported, “The U.S. savings rate hits record 33% as coronavirus causes Americans to stockpile cash, curb spending.” In December, 2020, a nurse in New York became the first person to receive the coronavirus vaccine outside of a clinical trial. Joe Biden was sworn in as the 46th president of the United States, January 20, 2021. As we made progress against the virus, and the economy began to open up, demand for goods and services exploded, midst record deficit spending by the government and spending by stir-crazy consumers flush with cash. With supply chain disruptions and labor shortages, we see the result of “too much money chasing too few goods and services,” galloping inflation.

After taking office with climate change concerns pushed aggressively by activists, President Biden introduced “The Biden Plan for a Clean Energy Revolution and Environmental Justice,” what some have criticized as a “Green New Deal Light.” A clean energy transition is inevitable as fossil fuels will not last forever. However, in the here and now, reality bites! Clean energy can meet only a fraction of our power needs. America and our allies do not want to depend on Putin’s Russia to supply oil and gas. In a twist of history, President Biden is asking the Saudis to ramp up production, and we’re even talking with the dictator that runs Venezuela. Expect to see pressure to further develop America’s fossil fuel reserves, including coal, natural gas, and oil, benefiting the “energy sector.” If a “red wave” envelops Congress, look for changes in domestic fossil fuel energy policy as an “inflation fighting strategy,” even as we continue to move toward nuclear and clean energy options and breakthroughs, all eventualities with investment implications.

People may see green when they think about the climate but they also see red given prices at the pump and in the grocery store, inflation made worse by a supply chain powered by increasingly costly fossil fuels. They’ll see sweat-induced red when air conditioners shut down during heat wave brownouts. Looking at reality as this is written in the first week of summer replete with 100 degree plus days in Hotlanta, expect inflation to be far from transitory, but a challenge for some time to come. The peak? Who knows? When will the stock market bottom? Who knows? Rosy Scenario left town awhile back and her near term return flight has been canceled.

The Fed will continue to raise interest rates, consumers will cut back more than they have currently, demand will slow. Plan on a recession. If we dodge one, or if it’s a mild pullback, so much the better. Keep reasonable levels of cash reserves, and if possible, dollar-cost-average into solid, dividend paying stocks. You can’t market time a bottom, but in the long run, steady investing will make you look like a genius.