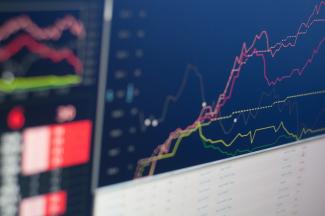 The Thump Heard on Wall Street

The clanging of the closing bell at the New York Stock Exchange on the last trading day of April, the 29th, more appropriately should have been replaced by a dull sound, a “thump” of sorts, given the monthly performance of the three major U.S. stock indexes.  The Wall Street Journal on April 30, 2022, said it all: “Nasdaq Caps Worst Month Since 2008.” The tech-laden basket of stocks dropped 13.3% in April, torpedoing trillions in market value. For the month, the S&P 500 stock index fell -8.8%; the Dow Jones Industrial Average, -4.9%.

The S&P 500 is down -13% for the year, placing it in “correction territory.” The Dow is down 9% year-to-date, while the Nasdaq officially is in a bear market at  minus 21%. With wild gyrations, where does that leave the conservative investor, especially one preparing for retirement or in retirement? Those who are not experienced traders or speculators and who have longer horizons are advised to “ride it out,” adding money on dips if possible.

There are times, as we saw recently, especially during the pandemic, when money chases companies and startups that pay little to no dividends. But following every jarring “adjustment” in no-dividend high flyers, money rotates into portfolios of well-established and long tested more tried-and-true names. For dividend yield comparison purposes, as of April 29, a major Dow Exchange Traded Fund (ETF) had a dividend yield of 1.79%. A leading ETF that tracks the S&P 500 index offered a dividend yield of 1.43%. The Invesco QQQ Trust that encompasses the Nasdaq had a dividend yield of only .55%.

The WSJ also on 4/30/2022 published an obituary for Geraldine Weiss (1926-2022), a legendary “stock-market guru who relied on dividends.” She once declared, “Dividends are real money─not just figures on a balance sheet.” And so they are! Financial advisors can show you portfolios, whether mutual fund based or separately managed accounts, that feature solid companies with a history of reliable and growing dividends.

With the future so uncertain, what to do? This writer has been involved in financial markets since the 1970s, and guess what? The future is always murky! Going forward, if you’re invested for the long term you will see periodic market corrections, bull and bear interludes, fad investments that come and go, and surprises bad and good. “Certainty” is FDIC insured money market funds when it comes to safety of principal, while recognizing that future inflation adjusted buying power is a hazard relative to cash. But looking at the long march of American history, it’s a fairly reassuring bet that our country will continue to grow and that solid diversified equity portfolios of dividend payers and other bedrock companies that supply needed, creative, and valued goods and services will grow over time along with Mother USA.

There’s always a crisis of one sort or the other that can give market traders and speculators either the willies or a sense of opportunity. Creative destruction comes to the fore, which can be unsettling, but somehow every problem, be it climate change, war, or money moving from one market sector to another, that spurs innovators, someone or some company or organization, to take risks and seek ways to solve the challenges du jour.

World War II, as horrible as it was, brought America out of the Great Depression as industrial mobilization created new and improved methods of production. Consider the advancements in aviation which spurred new opportunities for domestic and international shipping and travel. Often in the prelude to war when conflict is threatened, the stock market waivers and declines. But when battles commence, the market tends to go up as spending on war material rises along with increased investments in technology and innovation. America and allies that are supporting Ukraine will have to replace weapons and other materials that are being supplied. Government spending will increase, stimulating the economy further.

This suggests that continued inflationary pressures should be factored into your investment strategies. Wages are rising but real wages adjusted for inflation are falling. As of March, household spending rose at a faster clip than inflation. People with money are still spending on travel and dining, while also making substitutions in the goods normally bought to offset inflation, but a slowdown, even an ultimate recession, must be assumed as a possibility.

Have sufficient cash as a buffer, both to weather an economic storm or a personal or family setback, or to buy stocks in a downturn; but for the long run a portfolio of well selected and diversified stocks is a good bet to grow along with America and bursts of technological innovation around the globe that have been going on since the Industrial Revolution.